The future father, Inferior Silesia Canis /FCI/ Hōkō Hearty is an exceptional and elegant Boston Terrier with a beautiful head, great eyes, straight top line and a strong bone. Weighing 5,5 kg he surprises with his very high energy yet balanced temperament. He is a true showman, ring ready at any instant. In appearance Hōkō never disappoints. It’s really hard to pass him by unseen, he simply looks great!
He was recognized early on as a puppy, taking home 9 BEST IN SHOW titles in Poland! He received his Junior Polish Champion title in just 3 weeks and shortly after performed really well at the Euro Dog Show, 3rd place Best Polish Junior. Within his first year Hōkō had outstanding results: #1 Boston Terrier Male, #2 Boston Terrier, 2018 #3 Top Puppy in Poland. After a short break he returned to the rings to compete with adult dogs receiving Austrian Winner in Wels and taking home a BOS title. It’s just a matter of time before he finishes his championships from 4 countries and receives the International Champion title.
But shows are not all! Hōkō is also intelligent, quickly learning new abilities like obedience, puller training and nose work. His pedigree is filled with American fame like Campbell Clan’s Lamburgini Legacy and his fater Sunwoods Lamburgini. MtnView Man About Town, Renea’s Rocket Star Man and the famous Polish Szogun z Gdanska Rodem.

The future mother, Pannon Yaki – Tori Kira Beacon Street, was imported from Hungary from a well known kennel, Pannon Yaki-Tori, owned by Monika Petrovan. She displays a wonderful alert but kind character and a great top line. Kira’s demeanor is gentle and loving making her a wonderful home companion, even with children. Her movement is balanced, strong and graceful.

From this cross we are expecting crazy, energetic dogs, rather from the low to mid weight category in a highly American type – elegant, with long necks, square heads with beautiful eyes, straight top line and a proper light gait. We would like the puppies to go to owners who will work with them

Both parents are tested and free of genetic faults typical for Boston Terriers. All tests backed by certificates!

All interested puppies, feel free to PM me or write me at beaconstboston@gmail.com 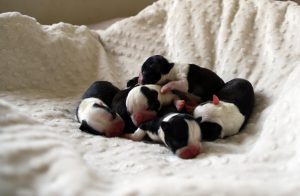 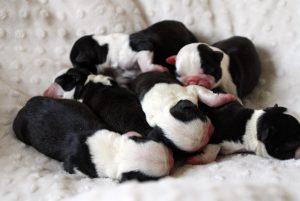 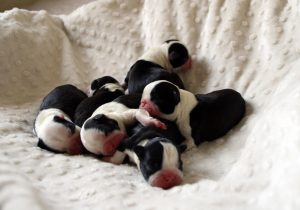