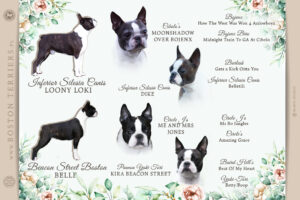 ABOUT THE LITTER F
The father: Inferior Silesia Canis LOONY LOKI is a young male with a wonderful head and a classic, “old American” style Boston Terrier expression that looks much like his grandfather: Bojenx How the West Was Won 4 Azcowboyz. Loki is a proportional, medium weight (8.5 kg) male with a strong bone and a strong neck on which he carries his head gracefully. Loki has a good top line, breaking nicely at the withers. Despite his strong appearance his movement is light and elegant with a very proper gate. He’s a truly exceptional male with an even more exceptional pedigree. Loki’s character is absolutely Boston crazy – high in endurance and beyond lively, he loves people and other dogs and is very sure of himself. He’s still a very young dog, just shy of 2 years, yet he already boasts titles such as Junior Champion of Poland and Champion of Poland.

The mother Beacon Street Boston BELLE comes from my kennel. We imported her mother Pannon Yaki-Tori Kira Beacon Street from Hungary from a well known kennel managed by Monika Petrovan. Belka stands out with her lovely, gentle character and excellent exterior. Proportionate, lively and highly intelligent Belka has a lovely silky-smooth coat. Her expression really looks like her father, imported from the states and well known in Europe – Cricle J’s Me and Mrs. Jones whose pedigree goes back to famous US studs such as US CH Sunwood’s Destiny Awaits, US CH Sunwoods Repeat Performance ROM, US BISS US CH Flashpoints Cosmic Ray ROM, US CH T-Bo’s Naughty Boy by Flashpoint. She’s energetic when active but very calm when playtime is over. She’s a medium sized Boston Terrier, weighing in at (7kg). One of her best features is her head – a square skull with large eyes set far apart and a well defined line between the nostrils, everything complimented by short erect ears situated on top, near the corners of the skull.

Both Parents have been tested for genetic abnormalities inherent in the breed: JHC: n/n ECVO: clear Patella: 0/0 Cardiovascular ultrasound: no abnormalities 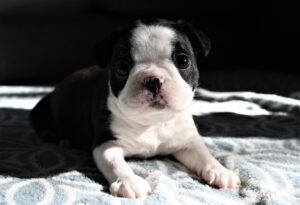 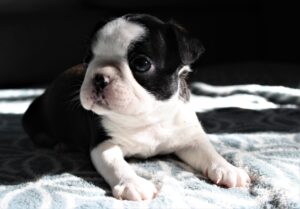 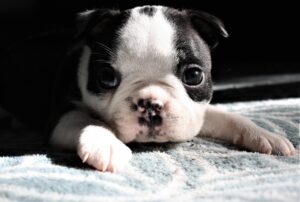 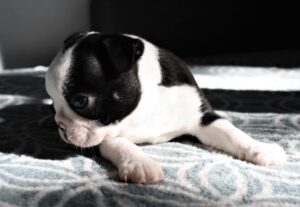 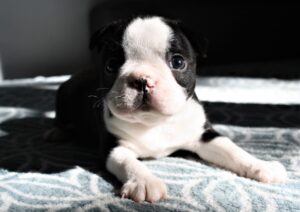 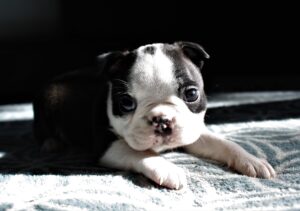 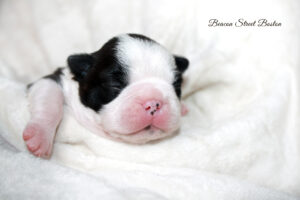 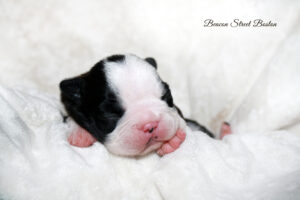 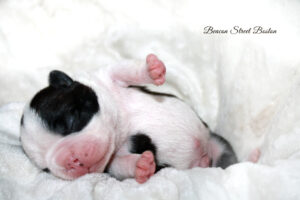 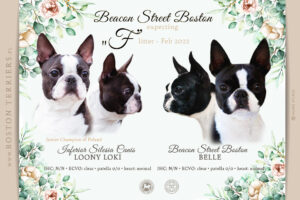