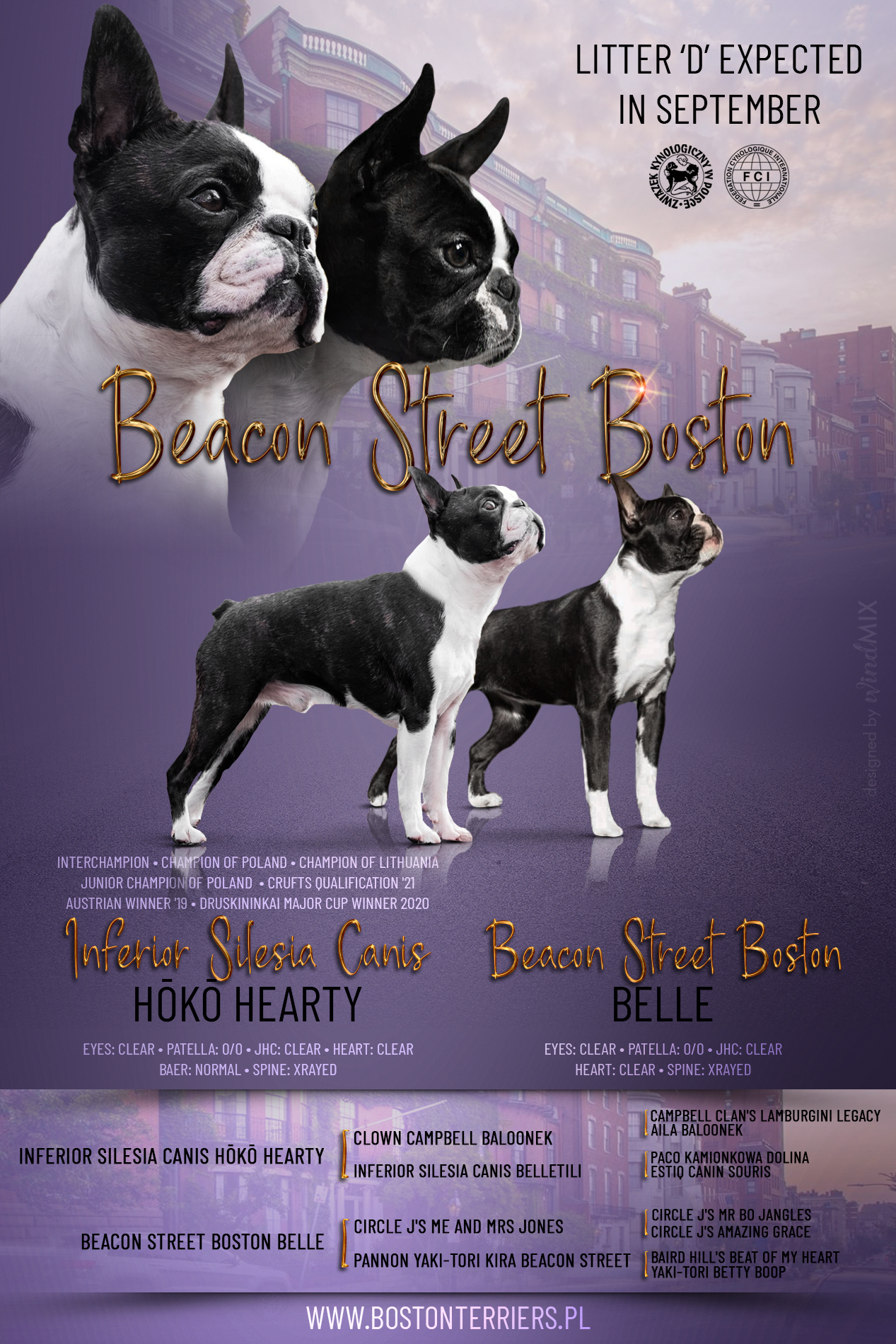 After being very impressed with Hoko’s last litter, we decided to use him again but this time for Kira’s daughter Bella. We have really high hopes for this slightly inbred cross. We expect beautiful puppies with a strong American appearance which comes from a well known dog in the pedigree: US CH Mtn View Man about Town ROM.

Inferior Silesia Canis / FCI / Hōkō Hearty is nearly 3 years old, exceptionally elegant Boston with a beautiful head, proper eyes, straight top line and strong bone. Weighing 6kg, he surprises with his boundless energy, but has an overall balanced temperament, a true showman.Hōkō never disappoints, and it’s hard to take your eyes off him whether standing still or in motion. Just as a puppy he has won BEST IN SHOW 9 times. He finished Junior Champion of Poland in 3 weeks as well as receiving a 3rd place at the European Dog Show in Warsaw as the best polish male junior. Before completing his first year he received #1 Boston Terrier Male #2 Boston Terrier and #3 top puppy in 2018. After a short break he returned to the rings where he received the Austrian Winner in Wels, at the same time receiving a BOS title. He quickly finished up his Polish championate and is now on standby due to COVID-19, eagerly waiting to complete his interchamiponate and other championships that he already started.

Shows are not everything though. Hōkō is a fast learner and very intelligent and has proven himself in agility, obedience training, nosework and puller work. His pedigree is filled with very well known American dogs like Campbell Clan’s Lamburgini Legacy and his father Sunwoods Lamburgini, MtnView Man About Town, Renea’s Rocket Star Man and the polish fame Szogun z Gdanska Rodem.

The mother of the litter, Beacon Street Boston Belle, comes from our first cross. She’s a mid-sized properly proportioned dame. Her expression really looks like her father, imported from the states and well known in Europe – Cricle J’s Me and Mrs. Jones whose pedigree goes back to famous US studs such as US CH Sunwood’s Destiny Awaits, US CH Sunwoods Repeat Performance ROM, US BISS US CH Flashpoints Cosmic Ray ROM, US CH T-Bo’s Naughty Boy by Flashpoint. Belle also took what’s best from her mother – proportions, a level topline, a full chest and excellent angulation in the front and back. Her character is very lovable, and she’s a good girl, very obedient and focused on the owner. She’s a great play companion for our 3 year old!